You are here: Home / ADHD Strategies / High School and ADHD Meds: Our Story 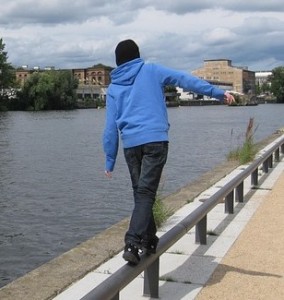 The high school secretary and I had a special friendship. If Joe or I discovered that he had forgotten to take his Strattera, he could go to the office and she would give him the missed dose. Over several months, it became increasingly obvious that Joe wasn’t taking his meds, and it wasn’t because he forgot. He didn’t want to.

So why didn’t he want the medication? The bottom line was that they made him feel ‘weird’. We’d tried several types, combinations, dosages, and they would work for a while, but Joe felt that they all altered the way he felt. They altered his personality, his appetite, and he hated the whole hassle. Yes, we could have forced him to keep taking them. But we didn’t.

My husband and I discussed this at length, and realized that the moment that Joe left home, he was going to quit taking ADHD meds. At that point, although we did have a 504 in place, we were really leaning heavily on the medicine to help Joe focus.

For us – and that’s just for us – we decided that we would take him off the medication totally, and try to teach him to focus and pay attention and remember his homework and track shoes and bus stop without the help of anything else. Our rationale was that if he wasn’t going to continue to take medication, we were doing him a disservice by not teaching him to manage his symptoms in other ways.

As a side note, we had already gone through the same thing with Ron, but Ron’s ADHD symptoms weren’t so pronounced. And interestingly enough, Ron went back on medication in college. So did Mike, for that matter.

In any event, our last years in high school for all the boys were spent without the tool of medication. (And that’s when I finally wrote Focus, Pocus.) Is that right for you? Only you can decide.

Read more about Joe – a success story.
Read my thoughts about medication.

qwe
Copyright © 2021 · All Rights Reserved · ADHD-Inattentive.com | Privacy Policy | Links on this site may be affiliate links. | In association with Amazon.com. Read our full disclosure here. Who Put the Ketchup in the Medicine Cabinet (adhd-inattentive.com) is a participant in the Amazon Services LLC Associates Program, an affiliate advertising program designed to provide a means for sites to earn advertising fees by advertising and linking to Amazon.com.