You are here: Home / ADHD Strategies / Medication for ADHD Kids 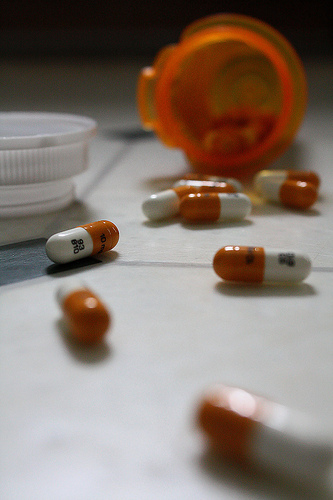 There is nothing that annoys me more than to hear someone make blanket statements about how ADHD should be treated. Our children are individuals, with different personalities, learning styles, diets, educational settings, and home backgrounds. Each child has different body chemistry, too. All these factors combined make it impossible for people to say, “If you’d just do such and so, Susie would be fine.”

But people do say it, and when they do, it often leaves parents like us feeling discouraged, ineffective, and insecure. I don’t want anything I write to leave anyone with those types of feelings. So remember, I’m not a doctor, a psychologist, or a teacher. I’m a mom with more than my share of ADHD boys. I can only pray that our experience will encourage you to diligently seek the best for your family.

When our first son was diagnosed, his teacher told me that we would work together and do whatever we could to avoid medicating him. With 504 modifications and a lot of effort and coaching from parents and school, he learned. His grades weren’t great (although standardized test scores were), but he learned, and that is the point of school. We had succeeded, and to me, it was quite clear that medicine was not for us. I confess to feelings of smugness and superiority to those mothers who had chosen what I felt was the lesser path.

Two years later, our son Mike was diagnosed. His teacher also had a son with ADHD/Inattentive whom she had never medicated. We worked diligently with Mike, but it didn’t happen for him. He was getting further and further behind, and his self esteem was starting to plummet. He absolutely could not pay attention.

With heavy hearts, we started to consider putting him on medication – specifically Ritalin. I began reading, and what I read scared me to death. Ritalin is cocaine for kids. Ritalin is the school’s way of controlling unruly students. Ritalin will lead to harder drugs. But I also read positive reviews on Ritalin. I was thoroughly confused.

So I had discussions with my doctor and pharmacist. I’ve known both of them for many years, and they told me personal stories about ADHD individuals in their family. My mom, a teacher, told me of being able to look in the grade book and tell when a child had started medication. She talked of one little boy and the dramatic boost in his confidence when his increased focus helped him to succeed in class.

I talked with two friends with ADHD who were undiagnosed as children, but who self-medicated with drugs and alcohol. One spent three years in prison for DUI, and the other still can’t remember anything about one year of his life.

Finally, I prayed that whatever decision we made would be for the best. And we decided that we would give medication a try. I don’t cry much, even at sappy movies, but when I picked up that first prescription I cried for hours. It was one of the most awful days of my life.

But the medication did make a difference. It did provide focus for Mike, and the focus led to learning, which led to better self-esteem. Mike was happier. But medication didn’t cure Mike. Yes, it helped him to focus, which led to self confidence and academic success. But it never helped him get organized, and it never made his handwriting better. It was just another tool in the belt.

We kept Mike on some sort of ADHD medication for two and a half years, but one year my husband felt like we should try taking him off. Although I strongly disagreed (“You’re not the one who has to pick up the academic pieces halfway through the grading period!”) I’ve lived with my husband long enough to know that he is usually right. And I’m happy to report that Mike was still able to focus and learn. He also was able to stay organized, turn in his work, and study without being prompted.

Attention Deficit Disorder cannot really be ‘cured’. It can be outgrown. It can be overcome. We can compensate for it, and make allowances for it. But there is nothing that you can do for your child that will just make ADHD magically go away. Only you can decide what is best for your child – no doctor, no educator, and no mother in law has the privilege of that responsibility. Do your research. Ask your questions. Say your prayers. Then go with your heart, because the love in your heart is the most important thing you can ever give the wonderful person that is your child.

Copyright © 2022 · All Rights Reserved · ADHD-Inattentive.com | Privacy Policy | Links on this site may be affiliate links. | In association with Amazon.com. Read our full disclosure here. Who Put the Ketchup in the Medicine Cabinet (adhd-inattentive.com) is a participant in the Amazon Services LLC Associates Program, an affiliate advertising program designed to provide a means for sites to earn advertising fees by advertising and linking to Amazon.com.