You are here: Home / Products for ADHD / An Alternative to Stress Balls for ADHD

Here’s another alternative to using stress balls for ADHD, sent in by a mom who subscribes to our newsletter. “My daughter is in high school and was having trouble sitting and concentrating for the whole hour of class. She was either pulling pages out of her book just so she could get up and walk to the bin to throw it out or would ask to go to the bathroom just so she could go for a walk.
A stress ball is not really appropriate for her to use as other students would grab it and throw it around and the teachers would not be impressed. I have tried the velcro. First I put it inside her pencil case but this didnt really work. I then just gave her a bit she could just hold as it was easier (under the desk didnt work as she is always moving room and they do not have assigned seating). She became reluctant to use this in class as well as the other students kept asking her what she was doing with it.

What I have found is pens and pencils with wobbly bits attached to the top have helped. She has several pens with fluffy hearts or stars, cute animals or figures on top that are on a spring. She can fiddle with these and she says it helps her concentrate. She now no longer has to keep going to the bathroom and we are saving heaps of paper!”

This is a great idea – and it would make a great stocking stuffer! Here’s an example I found of some cool Fidget Pencil Toppers 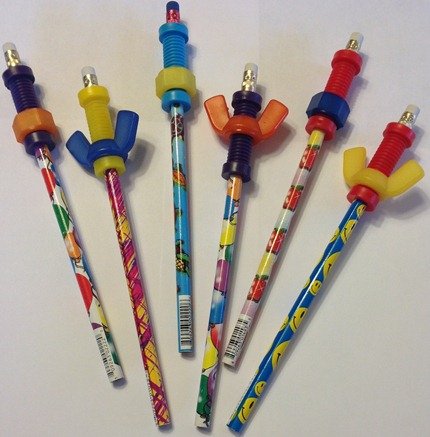