You are here: Home / ADHD-I Blog / Is Candy Dandy or Downright Dangerous?

A few days after Halloween, the treat bags steadily dwindle as each child digs in enthusiastically. Favorites go first, 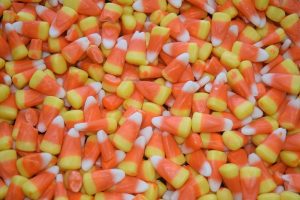 and trade negotiations for the last box of Milk Duds make the latest UN efforts seem low key in comparison.

While the candy goes quickly, one question remains: Does candy make them hyper or not?

For three out of four boys at Kayla’s house, sugar made no difference in their behavior. Ash, the one without ADHD, could simply smell the candy and would start bouncing around like Tigger.

I have to admit that I worked hard to limit sugar at our house. Edison was nearly two when he had his first brownie. (Yes, he’s the first born.) Given the opportunity, Edison, Olivia and Lesley were happy with candy and yes, especially with Halloween candy.

Hyper or not? Hard to say, honestly. After a good walk around the neighborhood to gather all that candy, they ate their share and went on to bed without too much fuss. Did the exercise cancel out sugar’s effect?

I still tried hard to limit the candy after any candy-filled holiday…two pieces a day after dinner. My bigger concern was that when children gorge on junk food, they didn’t have room for good food.

Birthday parties were another time that our kids would be in particularly active form — during and after. Was it the icing sugar? The goody bag? The prospect of being the last one picked up from the party?

As our children have grown into teens and young adults, it’s interesting to me that mine have all independently decided they don’t want to indulge in sugar that much. So far no one’s refused a birthday cake, but a sweet dessert is not a given at each meal.

Kayla’s boys, on the other hand, would rather have a salad than dessert (unless it’s watermelon) but they love candy, and eat it a LOT…Nerds, Red Hots, Sour Skittles. Don’t tell Kayla, though. She doesn’t know.

I’m not sure that we can blame every behavior on sugar; however, individuals react differently. While circumstances can decidedly skew your research, you may discover that your life is easier when your child gives up certain foods.
How about sugar at your house? How does it affect your child? Tell us your story!