You are here: Home / ADHD Strategies / A Hangman Spelling Nightmare 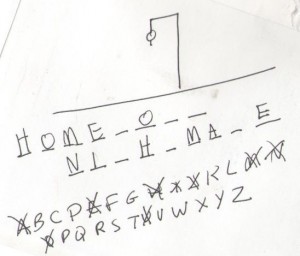 Colin is a seven year old first grader who is displaying some inattentiveness, and recently I was able to help Colin and his mom with a homework nightmare.

It was spelling – an online hangman game that had to be completed and submitted via the school’s homework system. (At least there was no book to bring home – right?!)

Anyhow, the particular problem Colin was having was a game of hangman. There were twenty words, and students could only guess incorrectly a few times before being penalized.

So Colin had a sheet of words, and every time he got one correct, he was marking them off. Here was the dialogue before I offered a solution:

After about six words, Colin and mom were very frustrated, I was having flashbacks to Joe and his mother. So I offered my solution. We took all the words, photocopied them using the ‘enlarge’ setting. I cut them into pieces. Then I showed Colin how to separate the words into two groups – three letter words and four letter words. We then sorted them further by vowel. Finally – because Colin had already completed several, we made a stack of words that had already been used.

The next word had four letters. Colin only had to look in one stack. He still guessed at the vowel, but as soon as he got it right, the answer was obvious. Then he moved that word to the ‘already guessed’ stack.

So basically we visually organized what Colin was seeing, then cut down on the clutter of the extra words he didn’t need to see. Making smaller ‘chunks’ of information reduced distraction. It’s sort of like the hint in “Focus Pocus” that says to only allow a child to see only a couple of math problems at a time.

You will notice that it took prep work on my part – something we warn you about in Waking Up from the Homework Nightmare. I had to spend about five minutes getting the word cards copied and ready. It probably shaved fifteen minutes off the homework time, so it was definitely time well spent.

Incidentally, Colin knew how to spell the words before he started the game. So his time wasn’t spent learning spelling, but learning how to organize.

Have you encountered a similar way to organize material to make it easier for your child to understand? Share it below!

Does this sound like your house? We can help!
Get your copies of Focus Pocus and Waking up from the Homework Nightmare here! Buy both and save!