You are here: Home / ADHD-I Blog / ADHD, Fidgeting and Fitness 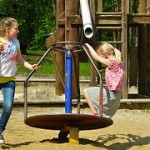 Is ADHD over diagnosed? If you listen to parents, you may notice a recurring complaint of children younger and younger who “can’t pay attention.” When a mother laments a six-year-old who can’t sit still, one wonders: what six-year-old wants to sit still anyway?

The Centers for Disease Control has tracked diagnoses of ADHD from 7.8 percent in 2003 to 11% in 2011. Have children changed or have expectations of children changed? The answer is, “Both!”

Children are expected to pay attention for longer periods of time. In some schools, kindergarten students are expected to sit attentively during circle time for 30 minutes at a time.

What happens when a child’s sitting times lengthen, and recesses shorten? Go into any class toward the end of the day. Kids are tapping, wiggling, chewing on things, leaning back on their chairs. They are moving as best they can while they are supposed to be sitting still. The kids know what they need, but we’re not letting them.

Children spend more and more time in upright seated positions – in classrooms, in computer labs and at home in front of tablet, laptop and television screens. Organized sports a couple times per week can’t make up for a daily routine lacking physical activity.

When’s the last time you saw kids in your neighborhood initiating a pick-up game of kick ball? Or have you seen them just tumbling down a grassy hill, spinning, jumping…or wandering over forests and fields?

Problems abound — the forests and fields aren’t as accessible as they used to be. And legitimate safety concerns lead parents to closely supervise their children’s play. The days of children wandering a bit and playing until dark or until they hear a familiar call don’t happen too much today.

Restricted movement for so many children has led to balance systems that never developed as they should. To develop strong balance and sensory systems, children need to move in all directions – a lot!

Then the teacher says “Be still, already!” So they do, and they zone out again, maybe not to return for the rest of class.

Fidgeting isn’t the real problem – a lack of activity is.

So greet your kids when they come home from school – and send them outside to play. Talk to your school authorities about extending recess. These kids need to move again, and as a parent, you’re their best advocate to jumpstart a little fun activity..

qwe
Copyright © 2021 · All Rights Reserved · ADHD-Inattentive.com | Privacy Policy | Links on this site may be affiliate links. | In association with Amazon.com. Read our full disclosure here. Who Put the Ketchup in the Medicine Cabinet (adhd-inattentive.com) is a participant in the Amazon Services LLC Associates Program, an affiliate advertising program designed to provide a means for sites to earn advertising fees by advertising and linking to Amazon.com.